The blogger's quilt festival has launched on Friday and also I had decided when I finished my oldest UFO back in May that I would enter it for the festival, I haven't been able to write my post up until now.

If you are new visiting my blog, warm welcome and I hope you enjoy your visit today. The quilt I have picked is as I mentioned before my oldest UFO. I started it in 2004 or 2005 for my cousin's 20th birthday.
Inspiration:
I saw this quilt in Magic Patch that featured a lighthouse and knowing this was something she really likes and collected, I thought that would be perfect for her. 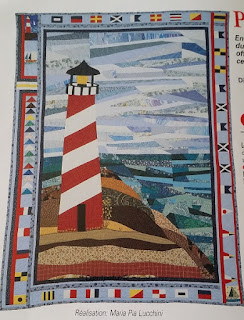 The lighthouse below, in Le Treport has a significant meaning as this where our great-grand-parents lived and our grand-mum used to go very often, so the lighthouse of the quilt had to match this one to be more personnel to both of us! 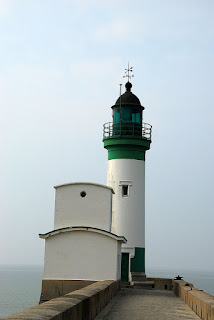 The making of a UFO
As I mentioned before I started working on this quilt in 2004/2005 but didn't go that far before she actually turned 20. I found the pattern quite difficult to make actually. I photocopied it in real size and used tissue paper (!) to paper piece the section. That was a big mistake actually, tissue paper is far too thin and not stable enough. Anyway because I was nowhere near finshed by her birthday, I stashed away my sections and lots of blue and grey fabric for later.... I briefly thought about finishing it for her 25th birthday but never got the bag out. I also thought about throwing it away thinking I would never finished it! I wasn't sure I still liked it to be honest and knew there was a lot left to be done... 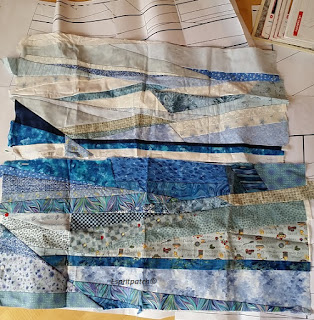 WIP and Change of plan
When I received an invitation to my cousin's 30th birthday party, I decided that I would either finish her quilt by then or throw it away. After all it had been stashed away for 10 years by then... I got the pattern, the photocopies, the section and all the fabric out to work out a plan. I decided to re-draft the pattern for the bottom part of the light house and to make it more like the one in Le Treport, so I amended the paper pattern 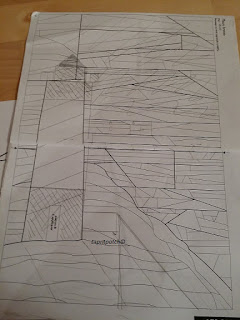 While doing so, I forgot that I would have to reverse the paper pattern but never mind, I did work it out somehow. I also continued with the paper piecing but this time using paper, not tissue paper and also working on very small sections. It soon grew bigger and started to look like it was getting somewhere 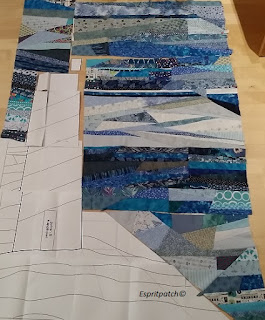 Of course with a change of plan and change of pattern half way through, there were a few hiccups to fix, but never mind, by this stage of having an almost complete top, I was happy with how this was coming along. 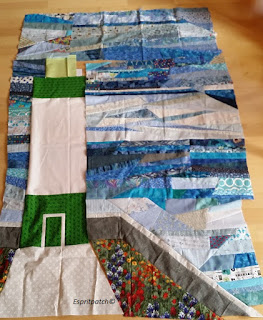 At this point, I must say I was quite proud of my quilt top, ready and scared of the quilting! 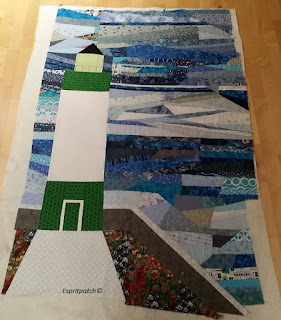 Free motion quilting
I used a variety of patterns, waves for the sea 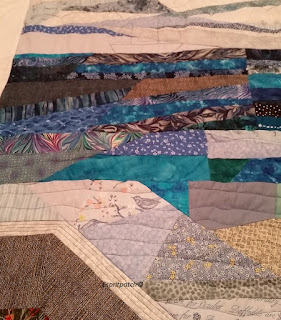 a few boats and seagulls 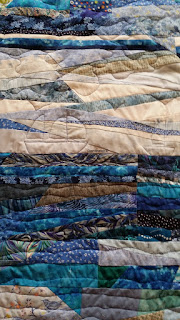 Some leaves on the light house wall 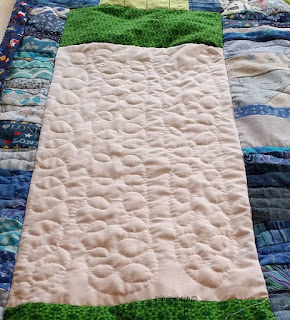 and some pebbles on the path 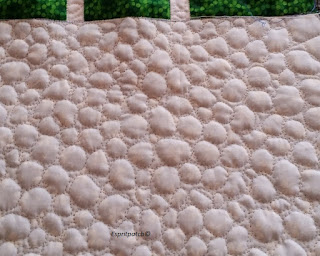 Finished quilt
I finished my quilt, in time for the surprise birthday party, gifted it to my cousin, who said she loved it. Well worth the wait for her, and well worth the effort for me! 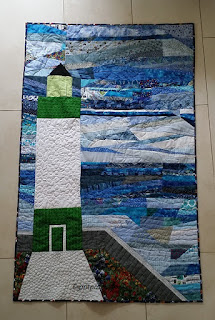 Stats:
Fabric: various blues from my stash collected over the years, Kona white, green  and meadow flowers
Size: about 36' by 75'
Paper pieced background, lighthouse pieced with the top applique.
Free-motion quilting on my home machine.
Started in 2005 and finished in 2015!